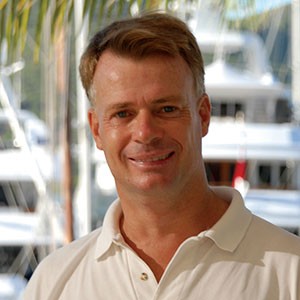 Andrew has been working in the Superyacht Industry since 1988 - when he first 'walked the docks' of the Club de Mar, in Palma, looking for a passage West! Since then, he has sailed around the world and completed six TransAtlantic crossings in his capacity as Professional Captain.

He has his STCW '95 MCA Class IV Master for yachts up to 3000 tons and is an RYA Yachtmaster Instructor. He managed various refits and a new build out of Southampton, chartered extensively throughout the Med and Caribbean, and did what every professional yachtsman knows he shouldn't do - buy your own boat!

With Caroline and a young family, they sailed TransAtlantic to Antigua, where they made their base for 11 years. Andrew began writing as 'World Correspondent' for Boat International, covering new builds and various Regattas. The need for a 'database' of reliable yachting service contacts became apparent - Andrew found himself recommending services, in Antigua and the Caribbean, to Captains who were returning after a few years being based in the Med or USA, or found themselves in new cruising grounds. This then was the very 'raison d'etre' for the first Guide book, to collate an 'inside Guide' of Captain's own recommended services throughout the Caribbean, to share the benefits of each other's collective experience.

So In 2002, they went on to set up Superyacht Publications, which has flourished over the years, and grown to now publish five Superyacht Services Guides to the Northern Caribbean, Southern Caribbean, Mediterranean, U.S.A and Worldwide. They have a very committed and professional team of authors behind them who have been researching and writing for many years, outstanding graphic designers; for the Guide books, Simon Udal Design; for the website, Molini; a supportive print team in Colombia, Barcelona and Canada, and sales team in Bluewater Books. Andrew now not only researches and writes the Spanish chapters of the Mediterranean Guide, but is Editor of all the Superyacht Services Guides, and since 2011 has been based in England, with his family.